As they prepare to run 13.1 miles for the Newcastle United Foundation and The Foundation of Light, staff from Newcastle International Airport were joined by Newcastle United defender Paul Dummett and ex-Sunderland captain Kevin Ball during their training for the Great North Run, the Chronicle Live reports. In December 2014, the airport announced a partnership with both football foundations becoming adopted charities for 2015 and 2016.

“It’s important that staff working at the airport can participate in events such as these on behalf of our charities.” Eric Wrightson, car parks manager at Newcastle International Airport, told the online news outlet. “Training has been challenging but it’s very encouraging when colleagues, business partners, and passengers at the airport can support us in our efforts for such a great social occasion.” 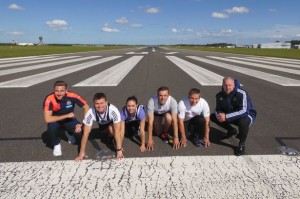 Sunderland AFC ambassador Ball praised both charities, and leant his support for Newcastle Airport’s contributions: “I admire anyone running the Great North Run, it’s such an important event for the North East.” He said, “The Foundation of Light and Newcastle United Foundation do a tremendous amount of work for under-privileged children in our region and it’s vital that we continue to support both clubs fundraising efforts.”

Both charities work with young people and families across the North East; using footballing knowledge to educate and inform in the arenas of health, sport, and teamwork. “It’s fantastic to be able to come and help support those running from Newcastle International Airport in aid of both of the club’s charities.” Added United star Dummett, 23.