With so much to see and do in the great city of Aberdeen hiring a rental vehicle makes so much sense. Our Easirent Car Hire Aberdeen office is situated close to the airport – perfect for flights pick up and drop off. With competitive rates all year round backed up by our price match guarantee Easirent is the best place to book your next car hire at Aberdeen airport.

Hello, my name is Gordon and I am the Branch Manager for the Easirent Car Hire Aberdeen Airport branch. My team and I welcome you to Scotland! We are closely situated to the airport and we always have a full range of new cars ready for collection.

How to find us when you arrive at Aberdeen Airport

Arriving at Aberdeen Airport by air, please pick up your luggage, exit the airport and once outside arrivals please telephone our branch office on 0122 460 8690 to arrange transfer to our site at the hotel.

Arriving at Aberdeen Airport by train, the nearest rail station to the airport is Dyce, which is about two miles from the terminal and if you give us enough notice we can easily collect you from.

Arriving at Aberdeen Airport by bus, For your convenience there is a direct bus link from outside the airport to the town and local amenities.

Dropping off your car at Aberdeen Airport take the A96 Aberdeen-Inverness road for the Airport and turn left on to Argyll Road. Continue south for 100 metres. The hotel is on the left hand side before the SHELL Garage.

Although Scotland’s third most populous city, Aberdeen is still relatively small by European standards. Regardless, there is still a whole host of options for places to stay in the Granite City, with bed and breakfasts and inns taking more popular and readily available than hotels, visit Easirent Car Hire Aberdeen Airport for a value for money rental car to get out and about in Aberdeen. No matter your budget or needs, there’s bound to be somewhere perfect for you to stay in Aberdeen. Here’s our pick of the bunch. 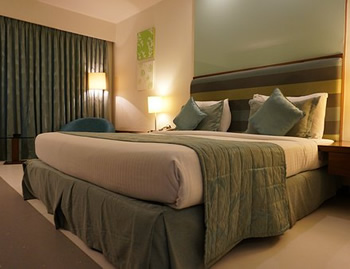 For hotels, you can’t avoid the big chains in Aberdeen, with Hilton and Premier Inn having several establishments in the city. The Premier Inn on West North street is as central as you can get, and offers free Wi-Fi to all guests, as well as use of the on site breakfast buffet.

If multi national chain hotels aren’t your thing, then try the local Skene House group, who operate three locations in and around the city centre. The Skene House Whitehall is probably the group’s most recommended location, offering guests the chance to stay in one of its small self contained ‘apartments’, ideal for groups, or for those planning on staying a while in Aberdeen. Skene House Whitehall has free parking for guests, and is a 10 minute drive from the city centre.

There is far more range for those who prefer smaller guesthouses and bed and breakfasts. Hannah’s Guesthouse in Ferryhill is one of the highest regarded in Aberdeen, offering guests a quiet clean and spacious place to lay their head. Breakfast is included and is a place recommended for those travelling solo or as a couple, as the guesthouse does not cater to families. Hannah’s Guesthouse is a 10 minute drive from Aberdeen city centre.

Scotland is known for its love of food, whether enjoying traditional classics like smoked salmon and fine venison, modern multi cultural delights like a good curry, or the artery frightening ‘new Scottish classics’ like deep fried Mars bars, Scotland is a country that thinks with its stomach. Aberdeen is no different, allowing visitors to eat what they want, when they want, offering all manner of cuisine at a range of prices.

For cheap eats, a trip to Kamoon Kitchen cannot be passed up. Setting up shop in 2015, Kamoon Kitchen serves up fresh aromatic Lebanese, Mediterranean and Middle Eastern cuisine at wallet friendly prices. Whether you eat in or take away, it is always guaranteed to please, with the take away aspect in particular a healthier alternative to a traditional doner kebab after a night on the tiles. Kamoon Kitchen is a 15 minute drive from the city centre.

For cheap eats closer to the heart of Aberdeen, then make a trip to Madame Mews Thai Café in Aberdeen Market. Not the most stylish establishment in town, but what it lacks in chic value it makes up in tasty wallet friendly Thai cuisine in very generous portions. Madame Mews is very popular, especially at lunch time, so make sure to plan any trip accordingly.

For high end dining, and lovers of exceptional fresh seafood, book a table at Silver Darling. A fixture on the Aberdeen dining circuit since 1986, Silver Darling offers diners a luxurious look at traditional Aberdeen cuisine. Proudly sourcing all its fish locally, Silver Darling embodies Aberdeen’s proud fishing heritage, being housed in the old customs house in the mouth of Aberdeen harbour. Silver Darling is a 10/15 minute drive from Aberdeen city centre. Booking is advisable.

And finally, for those who like their restaurants right down the middle, then book a table at Montmarte. Intimate yet accommodating, Montmarte offers diners the finest fresh French cuisine in all of Aberdeen. Using locally sourced ingredients such as fresh Aberdeen Angus beef and freshly caught fish from the areas fishing trawlers, Montmarte brings a little bit of Paris to North-East Scotland. Montmarte is a 10 minute drive from the city centre.

When shopping in Aberdeen it’s impossible to not talk about the big three; Union Square Shopping Centre, Bon Accord & St. Nicholas, and the appropriately named Trinity Centre. Between these three shopping monoliths, there’s not a lot you can’t find.

Out of the three, Union Square is arguably the most popular. Offering everything from high street favourites like Zara and Hollister, to higher end fashion like Michael Kors and Hugo Boss, Union Square is also home to a massive food court and a host of restaurants with over thirty (yes thirty!) eating options available. You can also find Apple in Union Square, as well as a ten screen Cineworld cinema on the upper level. Union Square is open from 9am to 8pm, with the restaurants and cinema open until later. A 7 minute drive from the city centre, Union Square can be found near to the West coast of the city (and Scotland!)

The biggest shopping area in all of Aberdeen, Bon Accord and St. Nicholas was originally two separate shopping centres (built in 1985 and 1990) but merged together to create a complex which joins the two shopping streets George Street and Union Street – commonly known as ‘the Granite Mile’. You’ll find more high street favourites here such as Next and Topshop, and there’s even a Disney store for the kids (and the big kids too). Bon Accord and St. Nicholas are a 5 minute drive from Aberdeen city centre.

Last, but by no means least, there is Trinity Aberdeen. Comprised of over 45 retail spaces, Trinity is home to Aberdeen’s only Debenhams, as well as a host of other stores including Danish cult brand Tiger and clothing favourite Primark. Trinity Aberdeen is located on Union Street, and is a 10 minute drive from the heart of Aberdeen – hire a car with Easirent Car Hire Aberdeen Airport for a cheap way of getting around the town and local sights!

The Granite City is not all shopping centres and quick lattés however, as a trip further along Union Street brings you the West End shopping area, home of everything from fresh produce and cheeses, to whiskey and kilts! Other kilt makers in the city include Alex Scott Kiltmakers, who have been operating in Aberdeen since 1925.

Perfect for those embracing their Scottish heritage, Alex Scott also stock and sell all manner of Scottish gifts, from tartan scarves and Harris Tweed goods, to executive office goods and goods specific to ancient Scottish lineages and clans. Alex Scott is a 6 minute drive from the heart of Aberdeen, at the meeting of Schoolhill and Upperkirkgate.

It doesn’t matter what time of year you go, or for how long, Aberdeen is a multicultural city and a symbol of modern Scotland. In fact, check out or list of the best annual attractions the city has to offer. 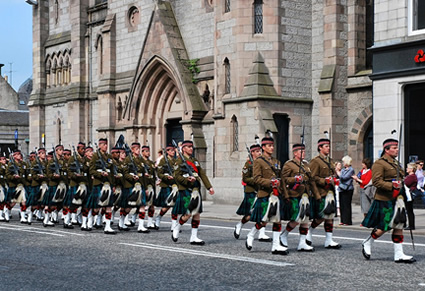 If you are in Aberdeen for an extended period, or are a fan of British Royal history, then why not consider a trip to Balmoral Castle? The castle has been a residence of the British Royal family since 1852 after being purchased by Prince Albert. You’ll want to load up on snacks and supplies for the trip, as Balmoral is an hour and a half drive West of Aberdeen, part of the beautiful and legendary Scottish Highlands, but the public grounds are only accessible to the public from April to July.

However, if you want to stay a little closer to the heart of Aberdeen, then don’t worry as the city has plenty of attractions for history lovers. The Aberdeen maritime Museum in particular is extremely popular with tourists, chronicling and displaying countless artefacts from Aberdeen’s storied maritime history, from its early days as a fishing settlement, to today where it is a hub for off-shore oil activity. Aberdeen Maritime Museum is a 10 minute drive from Aberdeen City Centre.

Nature fans will want to stop by the David Welch Winter Gardens in Duthie Park. One of Europe’s biggest indoor gardens, the Winter Gardens attracts visitors all year round to see its massive collection of rare and exotic flowers. The gardens are open to public year-round, but peak visiting times are from May-August and when you hire from Easirent Car Hire Aberdeen Airport you can visit Duthie and other places of interest with ease. The Winter Gardens are also home to an on-site café and toilet and changing facilities. Locating on the banks of the River Dee, Duthie Park is a 10-15-minute drive from Aberdeen City Centre.

Sports fans will no doubt want to take a trip to Pittodrie Stadium, home of Aberdeen Football Club. Home of Aberdeen FC since its formation in 1903, the Stadium has a capacity of over 20,000 and has been the scene of many glorious victories over the years, especially during Sir Alex Ferguson’s reign as manager in the 1980s.

The stadium on occasion also stages rugby matches from the Scottish national football and Rugby Union teams, and is also a venue for massive concerts from the like of Rod Stewart and Sir Elton John. Pittodrie Stadium is a 6-minute drive from the city centre, but bear traffic in mind on match-days.

Book direct on the Easirent.com website for the best price on Aberdeen Airport car hire. We have a large range of rental cars from small, economical run-arounds to family and large executive models.