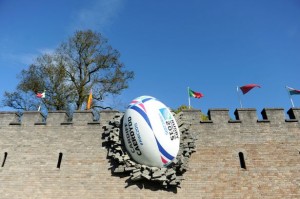 (Cardiff Castle’s Ball in the Wall)

Rugby fans were greeted with the sight of a giant ball in Cardiff Castle wall on Friday morning, as the city prepares to host eight matches and a month-long Fanzone event at Cardiff Arms Park. The first two matches at the Millennium Stadium are on Saturday and Sunday. But visitors to Cardiff have been urged to plan ahead with roads and transport services set to be busy. A bus strike has been suspended, but some services will be diverted.

Post-match queuing will operate at Cardiff Central train station with park and ride sites available for drivers. In the first of eight fixtures at the Millennium Stadium, Ireland beat Canada on Saturday, and Wales dominated Uruguay on Sunday. Arriva Trains warned services “will be busy over the whole weekend and there may be standing room only on many trains”. Arriva is advising customers to catch the earliest trains as possible in order to arrive in plenty of time for the game.

Park and ride sites across Cardiff will be running five hours before kick-off until four hours after the final whistle on each match day, according to official advice, however, spaces must be pre-booked. Cardiff Bus has announced diversions to some city centre services from 12:30 to 18:30 on Saturday and Sunday. People travelling during the tournament have been urged to follow the @RWC2015Travel Twitter handle for regular updates.