Newcastle began its life as a Roman fort on Hadrian’s Wall, a little later a community of monks created settlement there and the place became known as Monkchester. 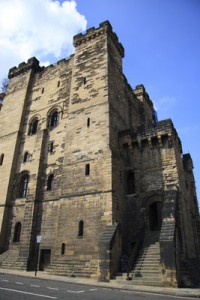 After that the Normans came and built their ‘new’ Castle on the site where an old Roman fort once lay. There is a wooden fort here that was built on top of an Anglo-Saxon cemetery by Robert Curthose, the illegitimate son of William the Conqueror. For many centuries the town lived next to the river confined within the walls for protection against the Scots.

Today, Eldon Square takes up precedence in the city centre. The beautiful Georgian architecture make shopping in the centre an historic experience. There are plenty of designer boutiques stocking cutting-edge labels and colourful independent galleries and craft shops full of original artwork and handmade treasures.

Newcastle’s Theatre Royal presents over 380 performances each year and is the regional home of the Royal Shakespeare Company – which stages a varied and exciting programme here every autumn – and also the National Theatre, Opera North and Rambert Dance Company.

The Gateshead Millennium Bridge which opens and closes like the blinking of an eye, a work of art in itself, arches across the Tyne to link the City to Gateshead Quays and the Baltic Centre for Contemporary Art.

A group of tall 17th century merchants’ houses are situated on Sandhill, as well as the wonderful elliptical church of All Saints that has now been converted into an urban studies centre and St Nicholas Cathedral which was once the parish church built in the 14th century; a period in time when Newcastle was known as the third most prosperous town in the whole of England.

Seven Stories is the National Centre for Children’s Books; celebrating how books are made, where they come from, and how we can enjoy and share them. Original artwork and manuscripts create innovative exhibitions and popular events. With exhibitions, dressing up, storytelling and crafts, Seven Stories spells the perfect day out for all the family.

The real boom for Newcastle came when in the 19th century the development of heavy engineering and shipbuilding took place and warehouses and factories cropped up everywhere. It was from this period of around 1825 – 1840 that a second phase of building took place to create the name ‘Tyneside Classical’. This century buildings continue to be erected in Newcastle, although now they are mostly office blocks that are described as soulless and do not depict the true history of Newcastle.