Top Towns in the East Midlands

Melton Mowbray
19 miles to the northeast of Leicester, and 20 miles southeast of Nottingham, this Leicestershire town lies between the course of the rivers Eye and Wreake. The self-claimed “Rural Capital of Food”, Melton Mowbray is perhaps best known for its culinary specialities, being the home of the eponymous pork pie and one of five homes of Stilton cheese.
Melton Mowbray pork pies are made with a specific “hand-raising” process and recipe. In 2008, the European Union awarded the Melton Mowbray pork pie ‘Protected Geographical Indication status’. This ruling means that only pies made within a designated zone around Melton, using uncured pork, are allowed to display ‘Melton Mowbray’ on their packaging.

Loughborough
In 1841 Loughborough was the destination for the first package tour, organised by Thomas Cook, for a temperance group from Leicester. Today it is home to Loughborough University, noted for its sports-related courses and achievements, as well as five museums. The largest being the centrally located Charnwood Museum.
Loughborough is also home to the world’s largest bell foundry — John Taylor Bellfounders – which made the bells for the local Queens Park Carillon memorial, Great Paul in London’s St Paul’s Cathedral, and York Minster. 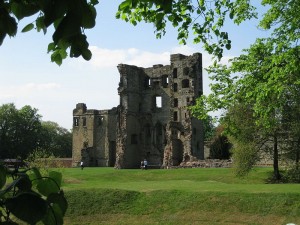 Ashby-de-la-Zouch
This country town is situated at the heart of The National Forest and approximately 24 miles south of the Peak District National Park. Currently placed on the A42 national route, the novel ‘Ivanhoe’ by Sir Walter Scott was set in the area of Ashby-de-la-Zouch Castle. In Scott’s story, the town hosts an important archery competition held by Prince John in which Robin Hood competes and wins.
More recently, a video game software house – Ashby Computer Graphics, also known as Ultimate Play The Game – was based in Ashby. Now called Rare, it has moved to Manor Park in nearby Twycross. ‘Ashby Statutes’, a travelling funfair, is held every September. Instituted by Royal Statute, it was originally a hiring fair where domestic servants and farmworkers would be exchanged. Locals call this event ‘The Statutes’.

Burton upon Trent
For centuries brewing was Burton’s major trade, and it is still an important part of its economy. The town is currently home to 8 breweries and also the corporate headquarters of pub operators Punch Taverns plc and Spirit Pub Company. A by-product of the brewing industry, figuratively and literally, is the presence of the Marmite factory in town. This in turn generates the production of Bovril. Both are now owned by multinational company Unilever and remain iconic British exports.
During the 1970s and 1980s a number of well known rock bands appeared at the 76 Club nightclub in Burton, including Dire Straits and the Sex Pistols. This year, the town celebrated ten years of its annual Bloodstock Open Air heavy metal festival and remains home to one of the oldest amateur radio clubs in the UK.