You’ve heard of Superfans. You’ve seen the tattoos, the posters covering every wall, the merchandise, but taking commitment to the next level, these van owners have kitted out their vehicles to show their appreciation for their favourite movies. Take a look at these top 5 fan-vans.

The Ecto-1 was the vehicle that the Ghostbusters used to travel throughout New York City busting ghosts and other entities. The vehicle used for the Ecto-1 was a 1959 Cadillac professional chassis, built by the Miller-Meteor company. The ambulance/hearse combination was the end loader variety. Dr Ray Stantz found the vehicle shortly after he mortgaged his mother’s house to buy the Firehouse. Because of his mechanical skills, he was able to repair the vehicle, which he acquired for $4,800. After repairs were completed, the vehicle had quite a unique character. It became a well-recognized symbol for the Ghostbusters franchise. The vehicle had enough room in it to store Proton Packs for all of the crew, along with Ecto Goggles, P.K.E. Meters, and a slew of Traps. 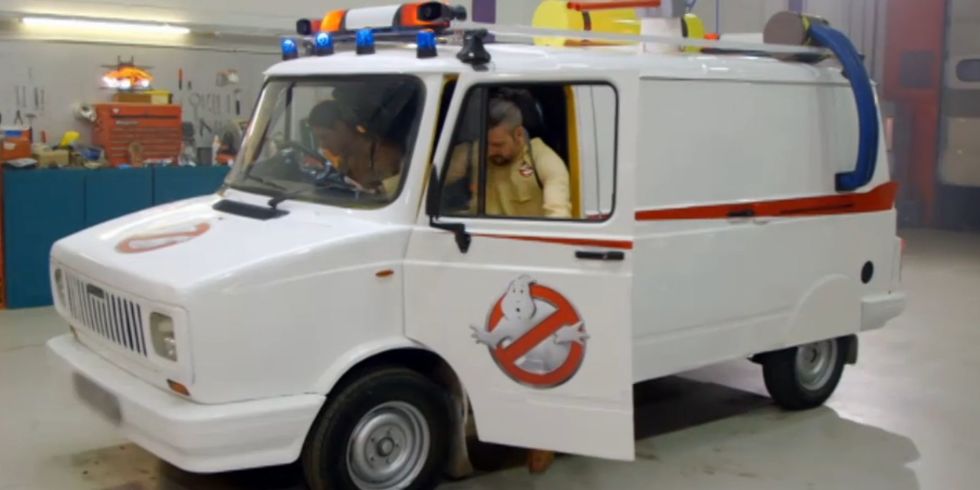 You may have seen this renovation on E4’s ‘Carjackers’ early last year. Dominic McDonough from Sunderland took his brother Patrick’s van for an 80’s inspired makeover. First, the team painted it white and affixed the famous ‘Ghostbusters’ logo to the back doors and bonnet as well as fitting pretend sirens to the roof along with other fake ‘ghostbusting’ equipment such as tubes, ‘ghost containment unit’ plus a ladder up the side.

Other fans include Mike Barr from Belfast who spent thousands importing an American hearse from the USA and refurbishing it in 2016. A siren, flashing lights and police-style light bar at the rear were wired into the car as well as a PA speaker and a sound system. Mike’s contacts even helped source a silver Ghostbusters hood ornament to complete the replica Ecto-1. You can now hire this vehicle from Mike’s company, Star Car Hire for those Ghostbusters die-hard fans among you.

Thirty years later, the original ECTO-1 from the film remains in great shape and it is on display through March 14 in the Hollywood Gallery of the Petersen Automotive Museum in Los Angeles.

From the cartoon Scooby-Doo, The Mystery Machine is the main transportation of Mystery Inc., taking them on their adventures all over the world. The Mystery Machine’s shape lends itself to be a 1960’s era panel van, however, conflicting details does not indicate it to be a particular model of that lineage. The vehicle is painted a medium blue with a distinctive horizontal green stripe around the van, adorned with two orange flowers. Each side of the van has a distinctive painted green panel with “THE MYSTERY MACHINE” painted in orange. The front of the van has a spare tire carrier, painted green, with one large orange flower located in the centre. Two roof racks protrude from the top of the van to secure further storage, and the van is also equipped with green and orange or yellow and orange flowered wheels or hubcaps. 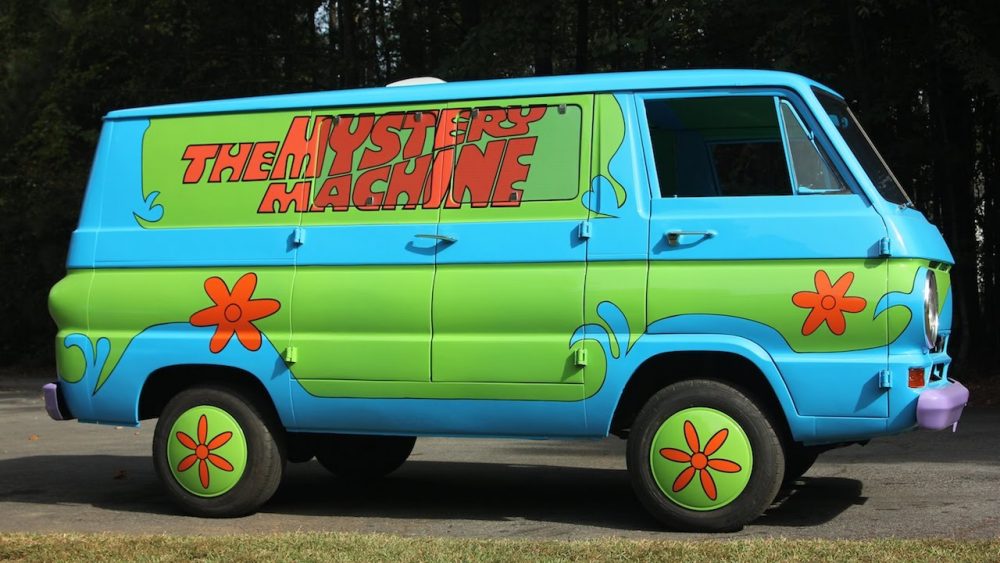 Although many campervan owners have attempted to create replicas of the Mystery Machine, one version we think has been done really well is that of Georgia-based Jerry Patrick. Jerry’s company AKA Junk has spent over ten years custom building TV and movie replicas but this Mystery Machine is one of the most impressive. Jerry and his team took a 1967 Dodge Ram and painted it in the signature green and blue, then added purple front and rear bumpers, orange flower details and kitted the interior out with a painted decal of the Scooby-Doo crew! 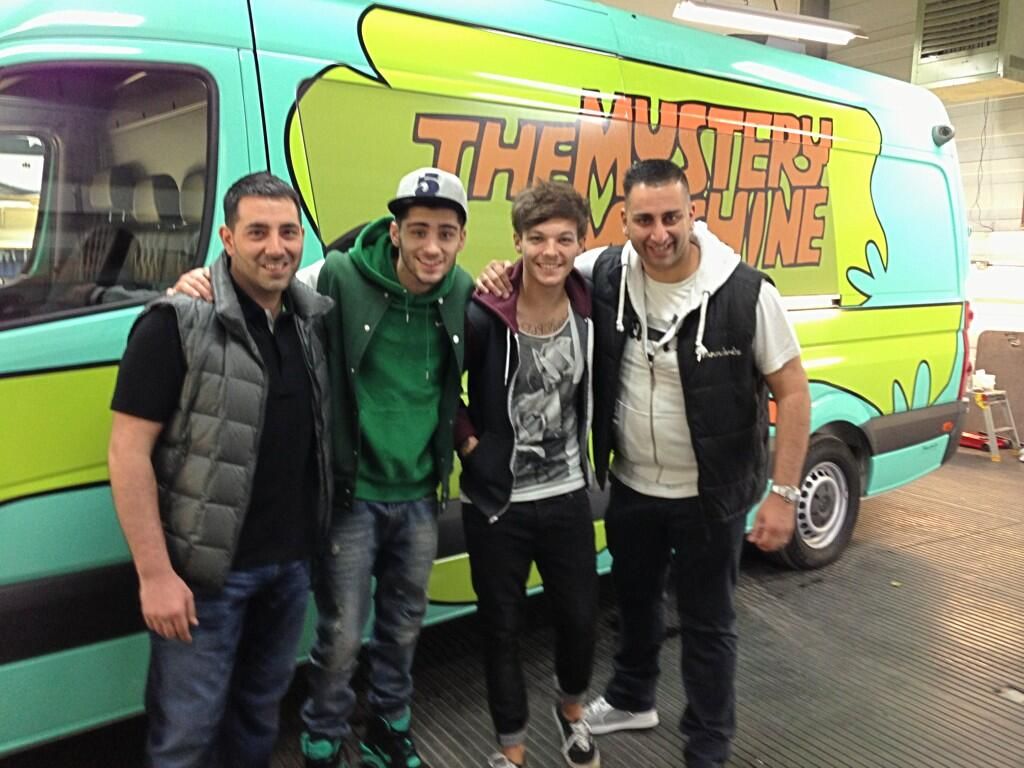 Another more famous attempt was One Direction’s Mystery Machine tour bus, created in 2013 by Yiannimize, Enfield. The VW Crafter van was converted into a luxury road cruiser to get the band from gig to gig across the US but unfortunately ran into copyright issues and had to abandon the idea. This version comes complete with Bentley heated leather seats, comic-book inspired roof, fridge, microwave, underfloor heating, 55″ plasma TV and a range of game consoles. It has since been listed for sale at £70,000! 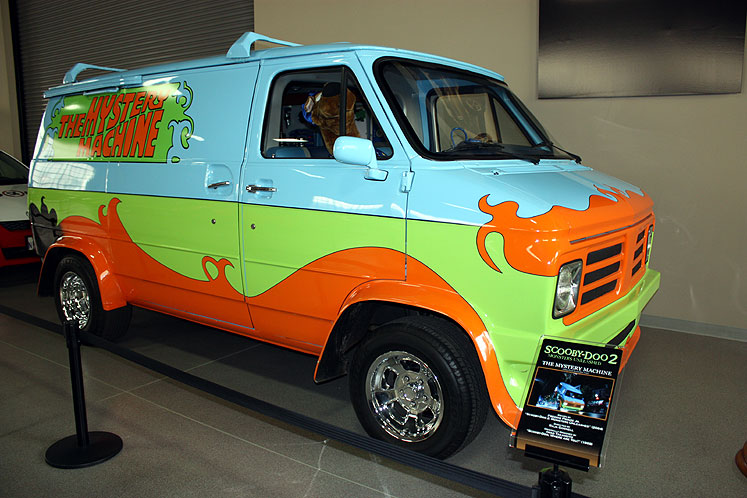 The real Mystery Machine van used in the motion picture is now sitting in Warner Bros. Studios in Hollywood although takes on a different look than the original cartoons. You can see fans many different version of their own Mystery Machines by following the hashtag on Instagram at www.instagram.com/explore/tags/mysterymachine/.

Of course, Star Wars is going to be a popular choice for vehicle-makeovers due to the amount of super-cool vehicles and spaceships in the movie franchise. Aside from the millennium falcon, the Deathstar is an obvious choice for decorations and inspiration. Especially to Californian, Tom Chronister who converted a 1977 Dodge Tradesman 200 Van into a 20ft Star Wars themed beauty. The van is painted with original star wars movie ‘Battlestar Galactica’ artwork, and wrapped in black, blues and purple, finished with lightning effects on the skirt. On the bonnet, Tom has artwork of Star Wars characters, Princess Leia and Luke Skywalker along with the famous quote ‘LUKE I AM YOUR FATHER’ above the grille. 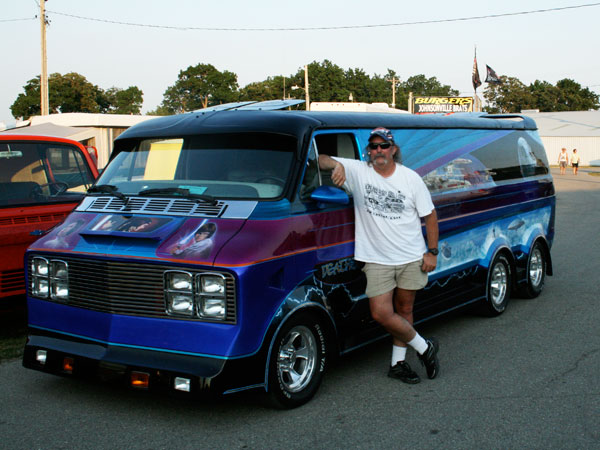 Another fascinating Star Wars themed van is this 1979 Dodge Ram van. It sports a zooming X-wing fighter, Darth Vader, and the Death Star graphics on the side and around back. There are even movie quotes by Han Solo-like “Travelin’ through hyperspace ain’t like dustin’ crops” on one side of the van. Also, Luke Skywalker dialogue is featured above the chrome bumper that reads: “ I used to bullseye womp rats in my T-16.” 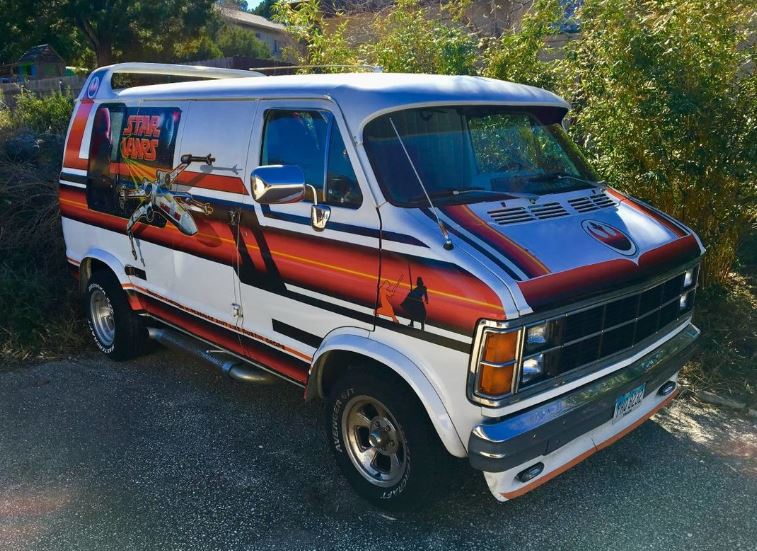 HOWEVER, nothing says No 1 Fan like an R2-D2 campervan! César Aguzzoli, a 26-year-old Brazilian now living in San Diego was inspired to start the project by spending over 50 hours designing a vinyl wrap that would transform his family’s van into a drivable R2-D2. “R2-D2’s body is a cylinder, so our initial idea was to unroll the cylinder and wrap the bus with that pattern. But it ended up not becoming one with the force, so we chose the hard way and decided to re-imagine and recreate the layout specifically to fit the van,” Aguzzoli has revealed. 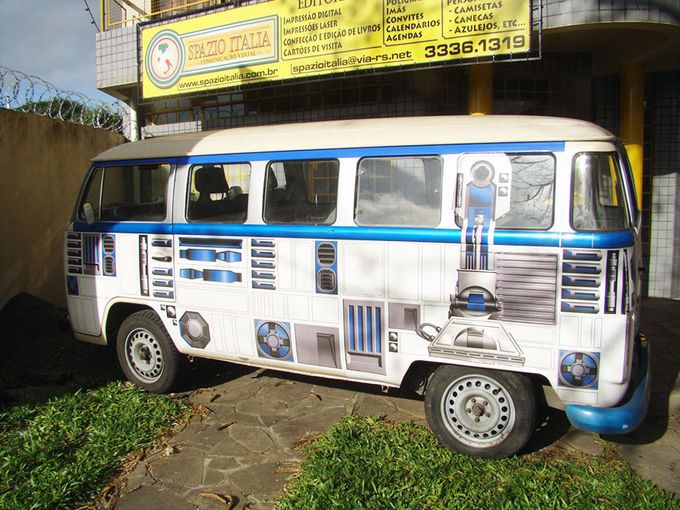 The black and metallic grey GMC Vandura van used by the A-Team, with its characteristic red stripe, black and red turbine mag wheels, and rooftop spoiler, has become an enduring pop culture icon. One of the original six vans used for the show is displayed in the Cars of the Stars Motor Museum in Keswick, northern England. The GMC Vandura used on the A-Team movie was also on display at the 2010 New York International Auto Show.

One such fan spent time doing up his van to look exactly like the one used in the show – meet James Brotherhood, 38 from Worthing, Sussex. The Chevrolet 1992 V8 van has the famous red stripe on the gunmetal grey paint with red wheels, a spoiler and front lights on its roof. The leather interior is laced with red stitching as well as a drop-down television and red interior lights shining from the roof. It has been used mainly for hire in weddings and birthday parties and can cost up to £1000, depending on the event. The van has proven to be a hit with grooms and groomsmen who have taken the opportunity to step into Mr T’s shoes as they travel to their wedding. After three years of painstaking modifications, James sold his replica on eBay. 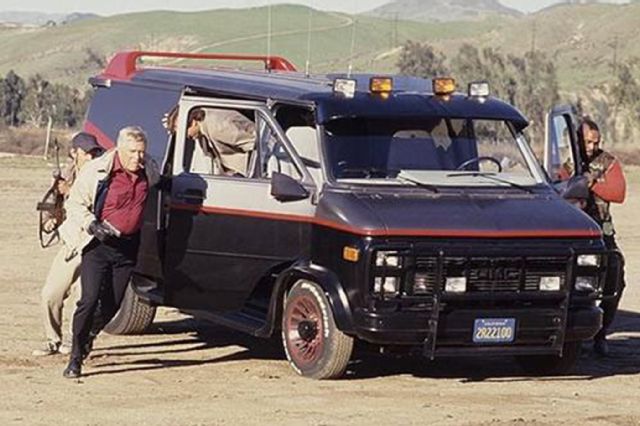 Both of the two remaining A-Team GMC vans reside in the UK’s Cars of the Stars Motor Museum which closed in 2011 to relocate to the USA’s Miami Auto Museum.

At Jurassic Park, there were two kinds of vehicles used on the island: the Ford Explorer Tour Vehicles that ran on electric power through a track in the ground, and the gas-powered Jeep Wrangler Staff Vehicles used by park staff for getting around in the park. All of the Jeeps are 1992 Jeep Wrangler YJ Sahara models. Their original colour was Sand Beige. 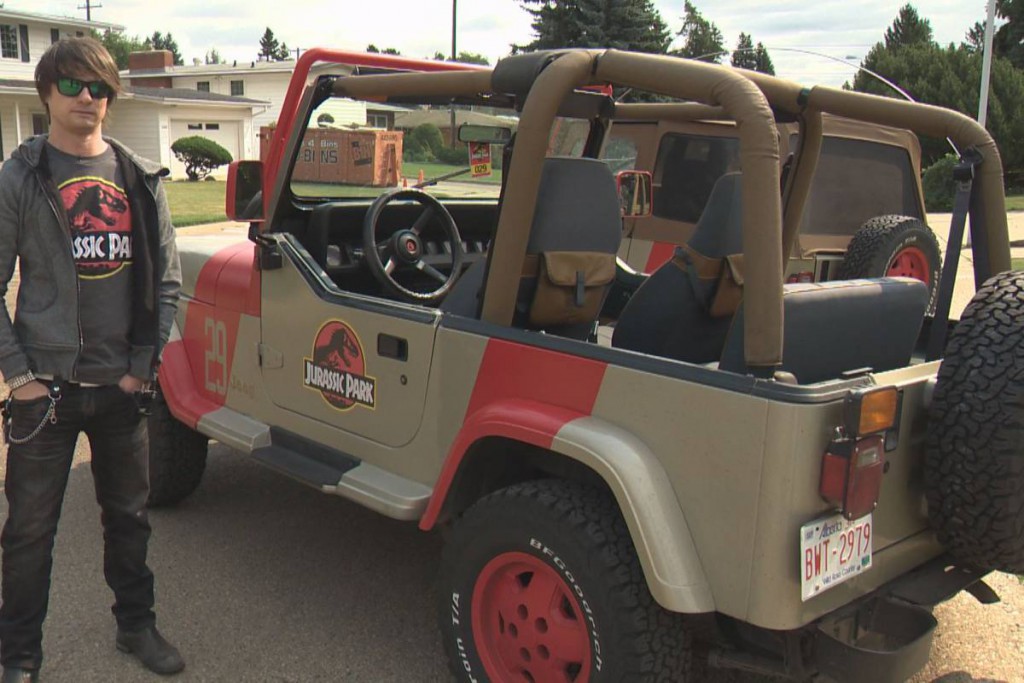 Some film fans collect memorabilia. Others re-create costumes and do cosplay. Well, Edmonton residents Michael Betton and Colton Taylor build Jeeps. Not just any Jeep — exact replicas of the ones used in the movie, Jurassic Park. Betton built one of the early ’90s Jeep Wranglers used in the sci-fi adventure film a few years ago, to include in his car club’s Stollery Children’s Hospital fundraiser. Betton got lucky and found the exact model used in the movie: a 1992 Jeep Wrangler Sahara in Sand Beige. According to a fan site, the model is rare because 1992 was the only year that specific colour was produced and it was only available on the Sahara package. “So I didn’t really have to repaint the Jeep all that much,” he said, explaining he got the vehicle as close to the movie specs as possible. “All I really had to do was sand it down, get rid of a little bit of glue and stuff like that, do a little bit of rust repair, do the stripes and decals for it, and then, of course, change the soft top.” The process took about five months to complete on evenings and weekends, with the help of friends and family. 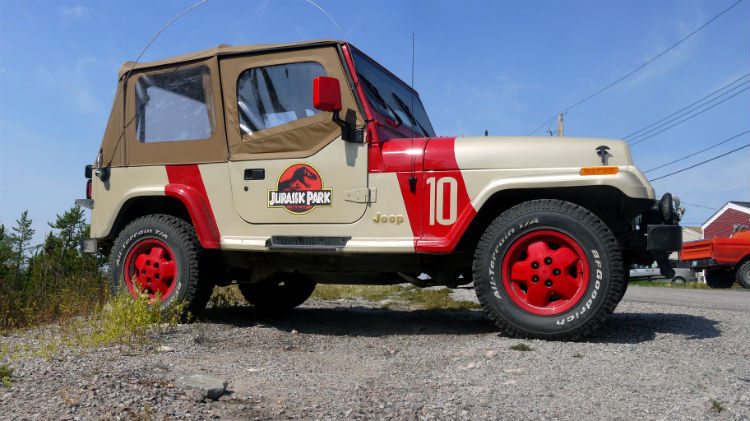 This Jurassic Park Jeep Replica was built by a fan who fell in love with it at first sight. Having seen the original movie at the age of 10, Leonel Menendez knew he wanted to have one of his very own. More than 20 years later, his dream has come true. The ’92 Jeep Wrangler was a long time coming. After the initial purchase of the Jeep, it was in storage for 16 months. Menendez then had to acquire Sahara package parts for the Jurassic Park Jeep replica project t get underway. He continued researching all of the parts he needed to make sure his replica was spot-on. When he got to work on it, it only took 6 days with a $14,000 price tag. Another Jeeper who took on this project claims it only took him about $1,000. This isn’t Leonel’s first rodeo though. He seems to have a passion for recreating movie vehicles. Before he took on the Jeep, he reproduced the “Yenko Camaro” used in the movie 2 Fast 2 Furious. 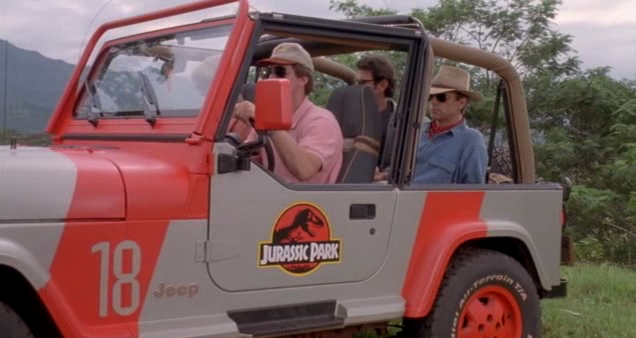 The original Jeeps seen at each of the Universal Studios theme parks worldwide seem to be rotated when being serviced and restored and some of the vehicles originally at the California park are now housed at Universal Orlando theme parks.